It seems that after over sixty-fives years of war the Korean War may finally be ending.  Many of our combat veterans from the era of active fighting on the Korean peninsula have already passed away. My Grandfather was a Korea combat veteran. He died before they actually achieved peace.

At this momentous time in world history, it seems an appropriate moment to remember one of the Korean War dead from my own family tree.

My maternal grandfather’s family was from an isolated community in the mountains of West Virginia. Coal mining was the predominate form of employment of the region and many of his immediate family, including his father and older brothers, worked in the mines. Military service was the most common way young men avoided going into the mines. Statistically a man had greater odds of getting hurt in the coalmines than he did in the military even during World War II.

My Grandfather’s first cousin, Andrew Calvin Shuck, joined the military. He enlisted in the Army on 8 July 1948. He was twenty years old.

Andrew C. Shuck was born 12 Jan 1928 in Lawton, West Virginia. He was the son of Landon Lawson Shuck and Pina Propps. He was unmarried.  Andrew C. Shuck was assigned to Company F, 5th Calvary Regiment, 1st Calvary Division. When combat broke out on the Korean Peninsula, his unit was one of the early ones to see action. 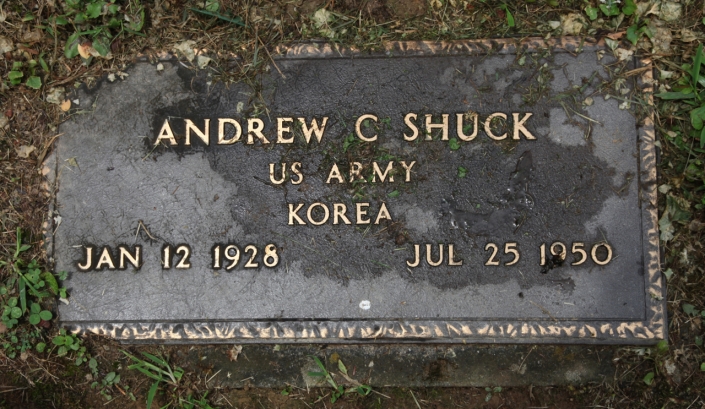 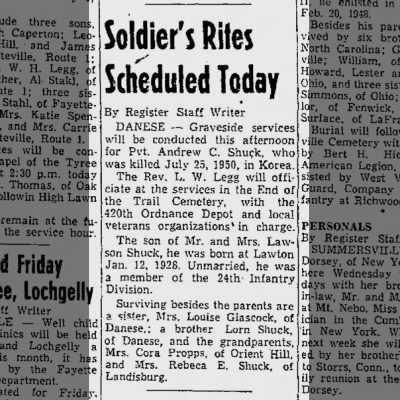 It took over a year before Andrew C. Shuck was laid to rest in his home state of West Virginia. By the time they held his memorial in the At the End of the Trail Cemetery several of Andrew’s relatives had already signed up to go to Korea. My grandfather, his brothers, and cousins all flocked to sign up for duty.

The Korean Armistice was signed on 27 July 1953 effectively ending active hostilities between North and South Korea in a stalemate. My Grandfather died in 2011 without even seeing an end to the conflict that resulted in his cousin’s death. I hope that in 2018, with the signing of the Panmunjom Declaration, peace can finally come between the two Korean nations.

Total American Casualties of the Conflict: 36,516

This site uses Akismet to reduce spam. Learn how your comment data is processed.

Remembering the Past Australia

Tales and thoughts from a quiet soul and seeker of simple

Its good to be crazy Sometimes

Past lives in the present

The art of step-by-step instructions

The Keeper of Stories

The Heneker Family - Pioneers from Kent to South Australia

Stories I Don't Want to Forget

Digging Up My Roots

one ancestor at a time

.. ramblings of a craft addicted genealogist

The experience, strength and hope of a recovering addict struggling with the disease of addiction.

Your window into the fascinating world of archives, manuscripts and rare books

What's On My PC

This, that, and EVERYTHING in the middle